When one of the most accomplished writers of our time, whose language, imagery and allegorical deft have transformed many a social crises into figurative labyrinths agrees to work with one of the formidable woman directors with a strong portfolio of socially oriented films to have captured liberal imagination, one would expect some cinematic magic to make a big impression. Salman Rushdie and Deepa Mehta’s Midnight’s Children promises much before the theater goes dark. But as the end credits roll in, you are left with a puzzling question: why did the two truly cosmopolitan and diasporic creative artists of our time squander so much so easily?

Midnight’s Children, the novel, is a tour de force in its magical realism with epic sweep through four decades after India-Pakistan Independence, and with its ability to speak for a secularist vision. In its narrative moves and shifts, its engaging imagery and struggling characters, it speaks of something else too, a subterranean sub-text that points to our collective failures and perhaps some successes. There is little doubt that Rushdie is a cinephile. From plots to images, from twists and turns to hints and bows, it becomes evident that he is writing cinema. The measure of his success over the past decades has come from the failures of others (including the Ayatollah’s) to grasp the subtleties of imagery that are so deceptive to superficial inquiries.  He has an affective relationship to cinema that filters through skillful affinities with cinematic references and allusions in his works. Midnight’s Children, the film provides ample evidence for this, from the poster of Mother India to exchanging of babies in hospitals so they lead different lives. Rushdie’s role as a co-writer of the screenplay (with Mehta) arouses even more hopes that his indulgence in cinema would find a different, rich expression. The literalness of cinematic image can be compensated by the complexities of narrative, but Rushdie’s talents seem out of place in this medium as he engages with it more directly than what he has done as writer, a critic or a cinephile.

Deepa Mehta’s film is ambitious. She embraces easily the expansive scope over four decades of history in which the private lives of individuals are entangled with that of a nation. The story begins early in the last century with Saleem’s grandfather’s life in Kashmir and then moves South and eventually to Bombay (now Mumbai). The principal punctuation nexus that defines the narrative occurs at the moment of Independence for India and Pakistan which is also the moment of birth Saleem, Shiva and other “midnight’s” children. These children experience the turbulence of the two nations, along with rocky lives of their own embedded in various positions of class and religion.

Midnight’s children have magical powers.  The protagonist communes with other “midnight’s children.” They assemble to sort out things, deal with their aspirations and conflicts. Their journey becomes the journey of two nations. Their lives unfold against the conflicts of two nations, including the war on East Pakistan that created Bangladesh and the tortured years of Emergency rule imposed by Indira Gandhi only to be defeated in an election. With the expansive scope of the narrative, the film negotiates between the reality of history and the magic of its possibilities. It is an allegorical tale of two nations, and with the protagonist firmly planted in post-Independence India, it indulges in India’s history over four decades.

The main strength of the novel is its ability to speak for political and social dimensions while it navigates the lives of individuals, the children of Independence who age along with their nations. These multiple levels so characterized in Rushdie’s work are confronted by the limitations of the image, its imminent reality. Cinematic image is too literal. Its “here-and-now” immediacy is attractive in the world it creates. Beyond these images, a filmmaker attempts to articulate figurative meanings. Adaptations arouse curiosity precisely to see how these challenges are handled by the director. Deepa Mehta’s film is eclipsed by the literal qualities of the image and comes short on awakening the figurative dimensions. From its costumes to its recreation of historic settings, including the suddenly dark age of Indira Gandhi and the Emergency, film’s images are stunningly photographed by Giles Nuttgens and supported by equally competent set design by Dilip Mehta and Errol Kelly. It provides little beyond the image. The film is “Miller Lite;” it tastes great but less filling. It is an impressive chronicle of India’s troubled generation which speaks as much to us as a Bollywood film does.

Rushdie’s own voice provides narration, further compounding the problem of the literal and the literary. He is simultaneously a public persona, a celebrity in his own right, an author that framed the lives of midnight’s children as a narrative of nations’ destiny, a screenwriter who compounds the problems of cinematic translation and in that sense, a cinematic co-author whose presence overpowers the film. He plucks metaphors and quips from his novel and loses their power in the uneasy delivery. His voice appears to have a less affective relationship to a film based on his own work than when he speaks on Wizard of Oz on BBC.

Midnight’s Children may be a good pictured novel for the post-Slumdog age in which images themselves become the story and we are invited to keep a distance from its contexts or it burdens. The film is suspended between its ambitions to transform a novel onto film while the film struggles to come into its own as an equally multilayered work. 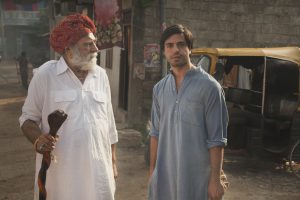 Perhaps the most disappointing aspect of this exercise/collaboration directs toward a missed opportunity to make this novel relevant for the current morass of religion in the sub-continent. The figures of swapped babies and swapped destinies and their power to magically connect with each other through turbulent times of history are at the center of the futility of separate destinies of two nations. A few more decades have passed since the novel was published. A lot more water has passed under the bridge. Rushdie has seen the macabre dance of religion and he has seen the deterioration of the promise of secularism. Not merely on the sub-continent but also from the diasporic vantage point that he shares with Mehta. Rushdie takes the hackneyed plot of Hindi films, the idea of babies swapped at birth, where a Hindu grows up as a Muslim (Saleem) and a Muslim boy is brought up as a Hindu (Shiva), to add spice to his narrative set up. This swap is engineered by a Mary, a Christian Nurse, offering a stage for religious conciliation. And yet, it could be seen as an attempt to show instabilities of religious identities in a divided country. In their hurry to pack 600 pages of novel into a film that wants to visit all the familiar historical posts, precious opportunities are lost to make the most of such allegorical devices. With some distance from when the novel was completed in 1981, Rushdie had an opportunity to add reflection on his sub-textual appeal of secularism.

Once you take some distance from its discomforting failures, the film is a visual treat as Deepa Mehta’s films have been. There has emerged a certain pleasing aesthetic in the polished images from India, either of poverty or of wealth and historical sweep and this film sticks to that lexicon. Its attempts to recreate historical landmarks or to film them with sensitivity to their historic contexts are impressive. The cast, led by Satya Bhabha and Siddarth and aided by Shabana Azmi, Om Puri and Kulbhushan Kharbanda, among others, is an able assembly of known talents. Seema Biswas (Mary) is always comfortable projecting anguish and contained emotions better than most character actresses in Indian cinema. But she must resist being typecast in these roles or else she would be yet another staple presence that appears in the same role film after film. 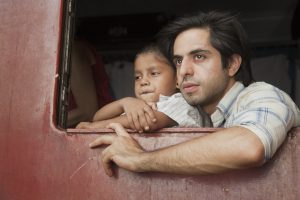 Rushdie concludes the film with the seminal observation on the narrative of the fateful generation. In a slight departure from the novel, he concludes (paraphrase) “Midnight’s children have failed India and India has failed midnight’s children.” If that singular insight had come through as a telling summary of the achievement of the fiilm, it would have been a satisfying experience.