◉ “Chapter 2 traces different, and unevenly developed, practices and habits of watching films around the world, examining a potent confluence of technological changes and cultural discourses that inform the ways in which we encounter films, whether it is in movie theaters (multiplex cinemas, art house cinemas, traveling theaters, film societies), on television, through physical media (VHS, VCD, DVD), or via smaller, portable screens. It also addresses other issues related to watching world cinema, such as piracy, with its various industrial and social manifestations, and subtitling. Despite new technologies that have radically changed the way we watch films, we find that theater persists as one of the most important forms of viewing, even as it is in decline in some countries or is being transformed by digital technology” (Deshpande and Mazaj 12).

◉ “The passage of films from large screens to hand-held, mobile ones has gone through a number of transitions. The story of cinematic exhibition is by no means a linear story in which older forms of viewing, particularly theatrical viewing, are being eclipsed and replaced by newer technologies and modes of viewing. At this moment in history, all forms of exhibition co-exist differently in various parts of the world” (38).

◉ Francesco Casetti describes the “filmic experience” which, while altered and relocated from the material conditions of the theater, still survives.

➞ “Relocation emphasizes the role of experience. A given medium is defined by a specific type of watching, listening, attention, and sensibility. Therefore, it is not the permanence of its physical aspect but rather the permanence of its way of seeing, hearing, and sensing that assures its continuity. A medium survives as long as the form of experience that characterizes it survives” (37-38).

➞ Click to view Atom Egoyan’s short film Artuad Double Bill from the anthology Chacun son cinéma/To Each His Own Cinema (2007), which demonstrates the fast-changing state of film exhibition and viewership 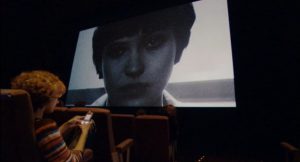 ◉ With the low costs and portability of the VHS, VCD, and DVD formats, piracy instantly became an issue that only intensified with the arrival of computers, hard drives, software, and the Internet

◉ Though morally complex, ambiguous, and multifaceted in its numerous manifestations and implications, piracy plays a role in promoting world cinema

◉ For the supporters of small and independent producers and directors as well as for large production companies, anti-piracy or copy-right laws provide the necessary protection to survive and to continue producing films

◉ The celebrated cross-border traffic of films faces a paradoxical situation: while the visual language of cinema is universally accessible, understanding film is conditioned upon the role of subtitles and translation

◉ The demand for translation has created “a huge need for translation services, a vast network of professionals and expanded opportunities, but those practices become increasingly implicated in the darker side of the global system that depends on the exploitation of cheap labor, rationalization, homogenization, and a ruthless search for new markets

◉ English language scenario/spotting list, a compilation of all dialogue is annotated with precise timings of all the subtitles

◉ The master file is always in English, regardless of the original language of the film, so that subtitles for texts from non-English-speaking countries are not just translation, but translation of translations

◉ Abe Nornes contends that the very name of the master file, “genesis” holds within it a “neo-imperial translation project positioning English as the source of all meaning”

◉ Provides another dimension to the global traffic of film

◉ Can be a political and protectionist gesture, as was the case in many European countries in the 1930s, which mandated dubbing to protect the linguistic integrity of the native soil and block out foreign sound

➞ In a reverse strategy, dubbing can be banned to protect the domestic film industry and preserve the gap between imports and regional product

◉ Dubbing can provide an instant comfort zone for the audience