◉ “Nollywood, the video-film industry from Nigeria, emerged on the scene in the early 1990s, when film industries around the world were going through major transformations of economy, production, and ideology. Since then, a spate of newspaper and magazine articles, photoessays, and documentaries have come out on this youngest film industry in world cinema, which express mostly curiosity about this film phenomenon defined by low budgets, spontaneous and improvised acting, poor production quality, and unfathomable production rates… Nollywood challenges the conception of world cinema as a totalitarian enterprise (Hollywood), as a selective mode (art house and film festivals), and as a contrarian model (a militant conception of Third Cinema)” (Deshpande and Mazaj 175).

◉  Nigeria’s transition from a poor participant in African cinema to a leading video-film producer is a story of the failure of infrastructural and state support for filmmaking, and the triumph of the entrepreneurial, commodity-driven economy galvanized by filmmakers. Before the implementation of the Structural Adjustment Program, the small film industry in Nigeria was, along with Ghana, a leader in Anglophone production. Until the mid-1980s, filmmakers in Nollywood produced films in 16mm and reversal film format, with partial, erratic support from the state and some with American funding Resources that were already scarce dwindled completely with the SAP imposed by the International Monetary Fund on Nigeria and several African countries in 1986

◉ Nollywood refers to three broad industries, characterized by their ethnicities and language. Kannywood, of the Hausa culture in the north and based in the city of Kano, has its own industry developed in deep affiliation with Islam.

➞ It is distinct from the two industries in the south around Lagos: Yoruba (Yoruwood) and Igbo (Igbowood) video-films, which are both inflected by different traditions. Other emergent and smaller industries based on ethnicities and languages also belong to the industry: Edowood (Edo films), Urhhobowood (Urhobo films), and Wafiwood (Warri pidgin-English films)” (176).

◉ The arrival of video-films in the markets of Lagos disproved the notion that once, “Africans consumed cinema but could not make it” (Haynes)

◉ Films are made with a video camera, first using videotape, then mini-DV and later digital formats. Minimal lighting kits are used for location shooting, with domestic interiors, Lagos neighborhoods, and rural areas as favored locales

➞  Scholars refer to the idea of “bricolage” in the context, situating Nollywood films as prime examples of appropriation, modification, and adaptation of cultures and cinemas around them

◉ Brian Larkin notes that cinema theaters remapped the sociality of cultural space, blending the material presence of cinema with the immateriality of experiences

◉ Besides theaters, new public spaces have emerged in Lagos and other parts of Igbo and Yoruba cultures, constituted through what is termed “street audiences”

➞ As video-films are screened on street corners and in video parlors, viewers gather around to watch them. They stand street corners and extemporaneous, informal spaces, recreating the absorption of cultural forms rooted in popular culture traditions but redeployed in urban terrain

◉ The postcolony adapts the mechanisms of the occult economy, while employing the apparatus of video-film to produce what Mbembe (2004) calls “the aesthetics of superfluity” 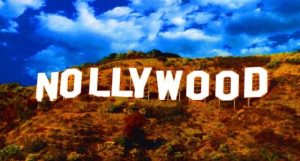 ◉ In the regime of overflowing but distant value in an ever-ex[anding sphere of commodities, two distinct imaginaries mediate the spectator’s relationship with social conditions, the “imaginaire of consumption” and the “religious imaginaire” (Mbembe, 2002)