Island City: A Prelude to a Future We’ve Already Lived Through!
Posted on April 7, 2016August 23, 2018 by Arcadia Cinema

Ruchika Oberoi’s debut feature is a three part anthology, a bold move that broadens the palette to portray the deep seated alienation and schizophrenia of life in Bombay. In varying style and narratives, she deepens the pain of the prosperous future we see and the suffering that never leaves us. The film speaks to the natives of a land ridden with contradiction of suffering and hope of future. It also speaks of the bold currents that have now taken hold in Indian independent cinema.

Premiering tonight at the Indian Film Festival of Los Angeles (IFFLA), Island City is a film that invites absorption and rewards with lessons in potency of anthology films which can deliver multiple critiques on issues at hand. Three short films are woven together in their narratives and in our interpretive approach to them. The three construct a whole that is greater than the sum of their parts.

The first of the three stories is set in a rote corporate setting of “Systematic Statistics,” easily identifiable for office workers of any era, where control is invasive and work a matter of survival. The space reeks of lifeless objects, while the humans are recognized by their servile mobility. The corporation encourages employees with nonsensical rewards to boost their productivity, such as “employee of the month,” and coupons to purchase more consumer goods. It is a perfect stage to watch capital perform its marriage with control over humans. We follow Mr. Chaturvedi’s day of celebration as he is forced to enjoy the award by stepping out of one meaningless setting to the vacuous pleasures of a shopping mall and consumer goods. Filmed as a sad satire of the corporate world in which the new working class wallows day-after-day, Oberoi empties out the spaces of capital with listless colors while she fills up the images of pleasure-world with excessively bold tones. The film moves boldly on visual and narrative tracks packing the theme of submission and power in the life of the city. Oberoi’s short would be a science fiction if it were not the cruel reality of Bombay’s corporate world.

The second story, suggestively named “Ghost in the Machine” centers on an employee of “Systematic Statistics,” injured at workplace, now on life-support in the Intensive Care Unit. The family realizes that life is enjoyable in the absence of his oppressive authority at home. Oberoi paints their happiness as an investment in the imagined world of TV soap operas, a favorite preoccupation of the city-dwellers caged in their cramped apartments. Watching TV, they fantasize about a world in which men are respectful and families strive for harmony. The family waits for the news of recovery of their provider fighting for life on his death-bed. So powerful is their world of fantasy that when reality presents them with options, they choose a practical if brutal choice. The ghost is in many machines here, soul-less families, the entrapment of dependence, and the grip of the idiot box called Television. Slow-paced but deliberate, the second short is filmed as a subdued soap-opera where action on-and-off screen is easily interchangeable. 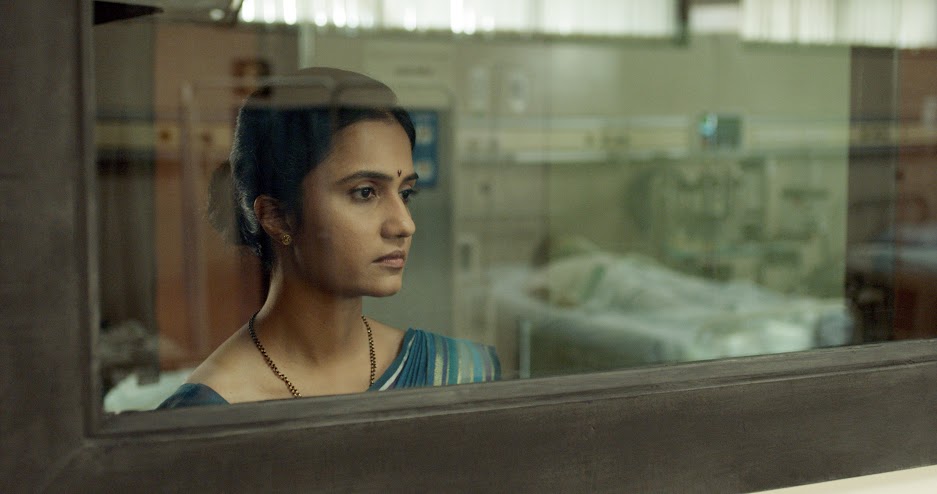 Having set the first two narratives as escape routes to the suffering of the working classes, Oberoi moves into the third narrative with a mellower tone. The central character in this short as it is in the second, is a woman, supporting family with a job at a newspaper press. Her mundane life meets humiliation in the form of her fiancé, a foul-mouthed macho man easily found on nearly all streets of the city. As she navigates through routines of survival, Aarti’s spirits are awakened by letters from her secret admirer. An instance of the sadness that fills the lives of women as they wait for a man’s endorsement to find self-worth in life, Aarti struggles to find her admirer, whose language wins her heart and moves her senses. The third short delivers another sharp critique of the grip of the machine, the ghost that never leaves the inhabitants of the city. The film is a character study of Aarti as it is a slow burning meditation on the life of women and their permanent, multi-fold alienation in a city that boasts of urban prosperity and progress.  Filmed in realist tones to depict life on the near-margins, the third short inches toward a surprise, not too distant from our cynical imagination.

The closed circle of the three narratives is a powerful statement on how the city looks to its future but remains trapped in its bondage.  There is a strident regressiveness behind the glamor of this city. Oberoi’s gift is that she merges three different tracks of the critique on the deep roots of the city’s alienation. A pessimistic film constructed as a satire of the life in the city, Island City is an anti-dote to the sugary romance of Ritesh Batra’s Lunchbox (2013), which centers on similar conditions of life but built on the center-piece of a love-story, always a good distraction from real problems.

Vinay Pathak embodies the docile submission of office worker in the first short, while Amruta Subhash is measured in her controlled emotions in the second, and Tannishtha Chatterjee caps the film with yet another bravura of a performance as Aarti in the final short of this anthology. Her sheer presence in the independent films says much about the quality of support the cinema deserves, as she shapes the narratives into interpretive depths not easily accessible to others. She has an untapped reservoir of expressions from the minute to the profound that make the final short “Contact” a treat to watch.

Oberoi’s film won the Best Young Director Award at Venice Festival in 2015, a strong sign of great work yet to come from an alumnus of the Film and Television Institute of India. A film not to be missed, Island City, bodes well for independent cinema in India.