Came across this little gem on Scroll website. My hearty thanks to Nandita Dutta from DearCinema for graciously translating the brief chat. Here it is, with a couple of micro-changes from me.  The gentle idealism of his vision pervades here. 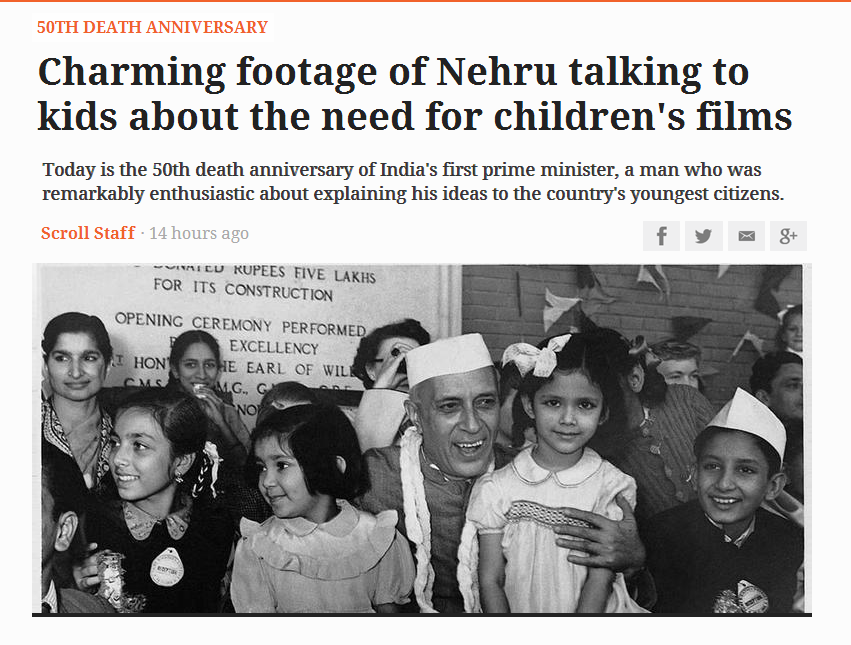 The question is whether children like this film or not. My liking or disliking doesn’t matter. If children like it, it’s good. If they don’t, it’s useless. The point is – other countries are making really good films for children now. Films which are meant for adults, no matter how good they are, may not be suitable for children. They might get bored and doze off. That is why there should be special films for children. This is our first attempt in that direction, we are trying to make more of them. But always remember that the real test of a children’s film is whether children like it. There is no point in asking adults. Anyway, so we are concluding that children’s films should be made in our country. Secondly, those films should be good. Because we don’t like anything second-rate in our country.

A child asks: “Have you acted in the films?”

Nehru answers: “But I am doing it here, now!”

Now imagine, there are so many types of birds in the world. Thousands of different kind! But how many of them can you recognize?

Can you just hear a voice and make out whether it’s a cuckoo?

Think of this- “We can make a film about Ganga (the river Ganges). So many stories we can tell about it!”

Let’s take another example. You see so many stars in the sky. Each one of them has a name and a story of its own. If you recognize a star by its name, it becomes your friend. If you are walking on the street and there’s a crowd, if you don’t know anybody, you will still feel lonely. But if you spot your friend in the crowd, you will be excited. In the same way, these constellations of stars look beautiful. If you recognize them, you can make friends with them.

These films come from outside, especially America, but the problem is they have nothing but fights. I don’t like fights. We have had enough of them, now why show them in films too? We have to try to create a country, a world, where there are no wars. People must live together in unity and work for the good of the nation. What do you think?