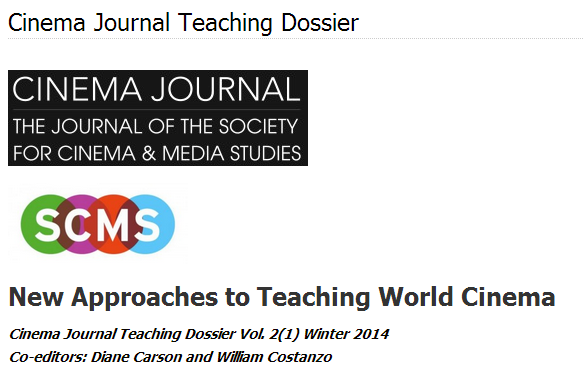 Meta Mazaj and I published a piece in Cinema Journal Teaching Dossier edited by Diane Carson and William Costanzo. The topic: “New Approaches to Teaching World Cinema Since teaching world cinema is our concern as much as writing on it, this was a very useful exercise. The connection between Alfonso Cuarón’s Gravity (2013) and Jonás Cuarón’s short film Aningaaq (2013) presented itself as a perfect parable for what we have come to think of as world cinema, much of it on the terms dictated by Hollywood. But world cinema is polycentric, without a singular power arrogating itself over others, where all the elements are intricately tied together in relationships of power and visibility.

The entire issue is full of great contributions. The stewardship of Diane Carson and William Costanzo was constructive and delightful at the same time. They shepherded the group to produce different perspectives on teaching world cinema, just as the topic takes hold in film studies around the world. In assembling these pieces together, the editors have set out the possible parameters for inquiring into the concept while also developing a sound pedagogy for it.

All the links to the articles are available here, but this is the table of contents—

“Introduction,” William Costanzo and Diane Carson
“What Is World Cinema? Structuring the Course,” Michael Talbott
“Centers, Forms, and Perspectives in World Cinema,” Shekhar Deshpande and Meta Mazaj
“Teaching Non-Western Cinemas in a Multiracial, Developing World Context, or What to Do When Your Students Are “the World,” Christopher Meir
“Not Many, But One: A Case-Study Approach to Teaching World Cinema,” Jeffrey Middents
“Making Transnational Connections: Current Events and Other Contexts,” Matthew Holtmeier
“Contrapuntal Reading in World Cinema,” Eralda Lameborshi