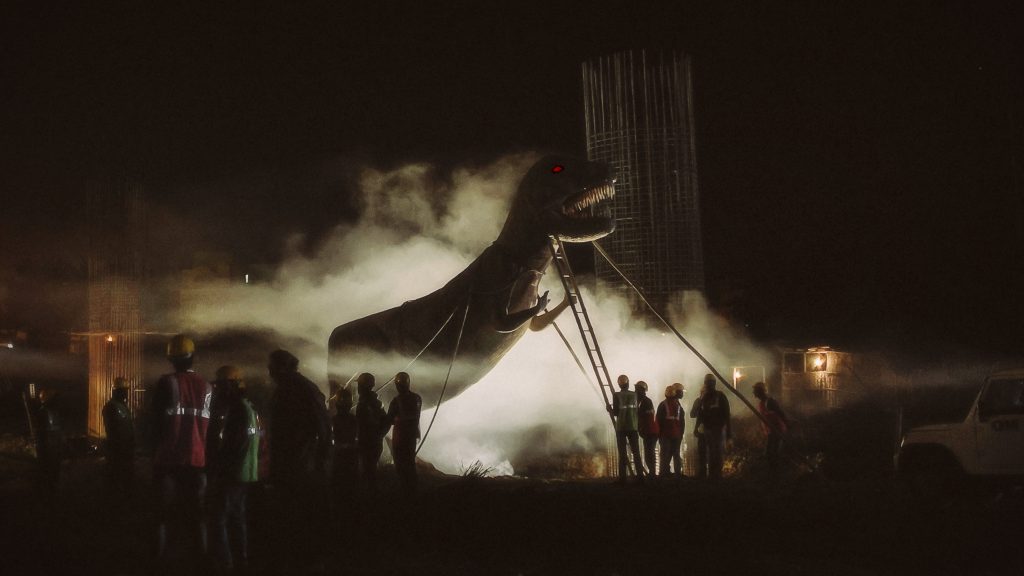 The name of the city indicates a past, tainted in part because of its colonial history, and soaked in part with memories of generations of inhabitants. Mrinal Sen called Calcutta his “El Dorado,” a treasure-house of contrasts that brought him pain and joy. In Aditya Vikram Sengupta’s third feature, the city straddles a transition to global modernity of speed, fly-over bridges and shopping malls.

A set of characters live in the once glorious architectural emblems, surrounded by the familiar poverty of congested alleys and dilapidated living quarters. As their living abodes fall apart, so does the moral fabric of their lives. A step-brother lives like a hermit in a majestic theater, closeting himself in the darkened corners of paranoid mind. His step-sister, daughter of a cabaret dancer, cannot hold her marriage together as temptations of desiring men (one a past lover and the other a craven, lusty real estate developer) begin to fray relationship with her husband. A young man collects money from hopefuls who want apartments in new buildings, raising their hopes to live in the modern, developing city. The pyramid scheme of collecting money and real-estate ambition collapses just as the moral lives of the inhabitants suffer decay. This has become a parable of modern life: moral fiber seems to be intricately tied up with transactional health of the inhabitants. Disorder sets in and their lives fall apart while the distinctly gorgeous housing structures in which they live begin to show the decay. The new Calcutta is built on death, marking the demise of its glorious past, the loving community and family which once made it proud.

Sengupta’s story of the city is familiar. The neo-liberal capital moved in aggressively to remake a world which it could not hold together. It brought destruction and when it did survive, it revealed lifeless people, objects, and living spaces as its achievements. Moral decay has become synonymous with contemporary life. It is a world of commodities and corruption, of destruction and debauchery. Sengupta’s narrative unravels the play among characters at slow speed. The decay brews in its own sauce. A fly-over is coming up, a feature too common to cities in India, remaking the skyscape and the city’s character with ruthless abandon. In Sengupta’s film, a huge dinosaur statue must be dismantled before the construction can take place. Familiar symbols like this mark the movement of the narrative, expected movement on a known-territory. The juxtapositions of the moral and the financial, the degrading past and the uncertain future are not entirely new. Sengupta takes time to map all the relationships and trajectories of their intertwining paths. While slowness allows the viewer to experience the ethos of transition, the familiarity of the plots help fade that narrative feature.

But what makes Sengupta’s feature memorable is its loving ode to the city slipping into past. Visual universe of this film is marvelous in the best sense. When camera stays inside the living quarters of the lower middle class, the old stairs, wooden frames of doors, windows, alcoves, walkways come alive as sculptural objects. There is the warmth of the old, a blanket of history on these spaces. The geometry of these spaces is so intriguing, and so enhanced by the well-positioned lights that the viewer wants to soak in the photographic wealth of images instead of rolling onto the next.

The object-and-space world of the film take precedence over the narrative elements.  This world speaks of both the precious living spaces of earlier generations and their steadily perishing present. Sengupta constructs an architecture of images out of these spaces. It is easy to witness his affection in rendering these images into a running tableau of presence and movement. The director knows the nooks and crannies that are simultaneously lit and hiding in the dark. A staircase becomes sculptural when the angle of viewing it is an unusual one, leaving the vantage point of eye-level or the level of routine movements.

Light and space both speak, both signify. The eye places itself in secretive vantage points to embrace the sight in a cinematic frame. The various image-sculptures created by Sengupta and his cinematographer Gökhan Tiryaki make the film a memorable work. The architecture of the old Calcutta, known little to outsiders who have not lived in it is rendered beautiful by the combined vision of the director and the cinematographer.

Gökhan Tiryaki has worked with Nuri Bilge Ceylan of Turkey, having created in that partnership works of remarkable cinematic wonderment. Here, the two extend the distinct aesthetic palette Sengupta has developed in earlier two films. His 2014 film, Asha Jaoar Majhe/Labour of Love has rhythmic movement against the light and dark shades of living quarters painted in fading light and darker corners. The film moved itself into the iconic echelons of some of the noted art films of the past two decades, particularly those from Asia (notably Wong Kar Wai). His next film Jonaki (2018) was a complex palimpsest of magical realism and surrealism, layering and intersecting past and present to construct a portrait of a woman and the history she lived in. Again, remarkable visual placing of different phases of time, using light as a device to speak of space and time rather than rendering objects clear. With Once Upon a Time in Calcutta, Sengupta creates a signature palette, this time putting it in the service of a loving yet melancholic memory of time gone by. Perhaps the familiarity of the narrative makes it easy to immerse ourselves fully into the artistic visual achievement of his latest work.