Watching Dev Benegal’s Road, Movie (2009) aroused a number of issues, questions, doubts and mixed responses from admiration to dismay. In some ways, that must be considered a compliment. The film is finally available on DVD and a reappraisal is in order. Here is the first irony about the film; were it not for the DVD and portable technologies, our access to the lives of traveling film theaters, film projectionists and the years past would be limited. In any case, our thoughts begin with this film and move on to the larger issues of cinema itself. 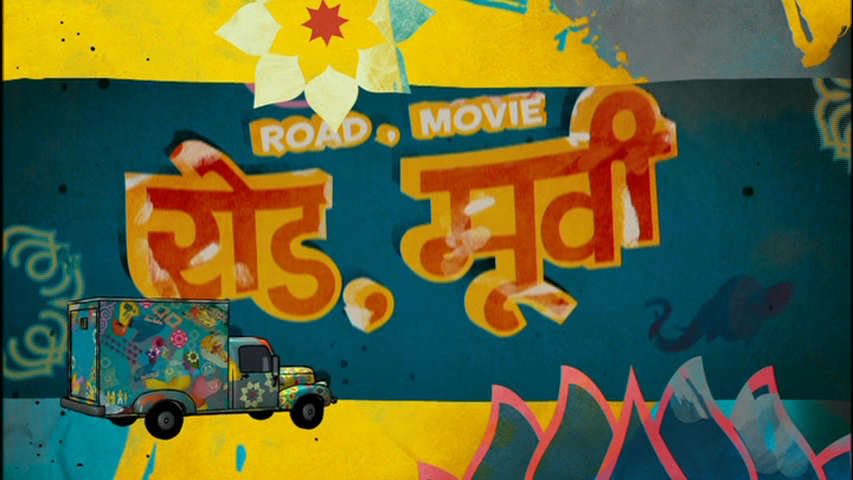 When you are watching the film with some distance from its theatrical and film festival release (Tribecca and TIFF, for example), it is inevitable to also see the film through the filter of its reception. As we know now, it was received positively, even with a brief, positive review in the Los Angeles Times and similar praise elsewhere. Generally, it is touted as a film of “self-discovery” for the central character of Vishnu, who, tired of his father’s dying business of selling foul-smelling but apparently miraculous hair oil, takes on the task of driving a van-truck across to the sea shore. This is no ordinary van-truck; it has film projector in it and works as a mobile theater for the rural areas. Vishnu is a “city-boy,” full of presumptuous attitude toward the magical and practical, political and rural. He picks up three interesting characters in his road journey to discover at the end of the film that he can indeed revive the business of selling hair oil. He has finally found his mojo in the business he inherits from his father. 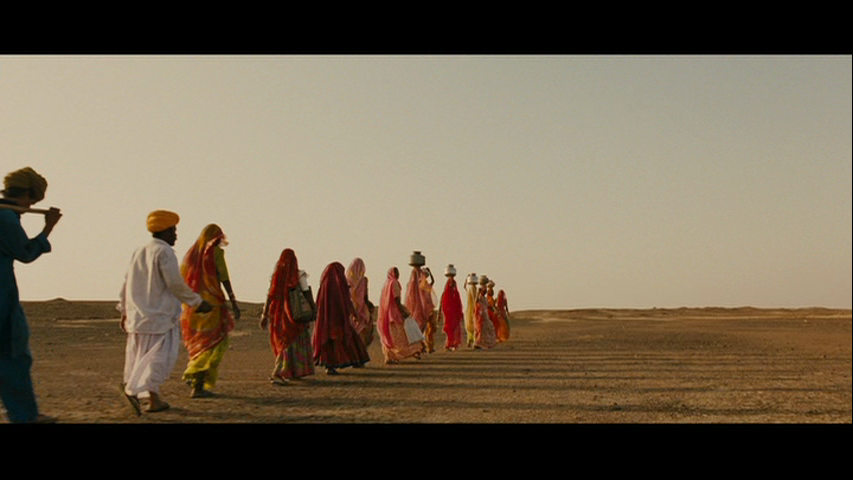 The varied allusions the director offers to a host of issues on the road make this journey intriguing.  There is water shortage in the desert, the corrupt cop who has his own torture chamber; the water bandit, who is pacified by discovering how Vishnu’s hair oil helps him find his own manhood, the submerged passion of Vishnu and a gypsy “woman” he picks up on the road, and most of all, the magic of cinema, awakened by the mechanic-entertainer who belongs to an era in which such magic was to be believed in. If the title of the film and the iconography of the film are to be taken seriously, and the DVD spends a considerable time explaining how artful an achievement this was, then the film drops what seems to be the central allusion in the film, the lost magic of cinema and its place in our imagination. This road journey reaches the moment of “self-discovery” for Vishnu, when he sinks half of traveling cinema in the sea-water, only to be relieved with a hair-oil massage. The film takes on a number of different rhetorical postures, from magical realism to parody to sarcasm, to melodrama, and even some didactic preaching about how corporations steal water from us to sell it back to us. Had it shown a loyal allegiance to any one of these causes, particularly the one that is so central in its narrative and iconography, Road, Movie (2010) could have become a terrifically brilliant contribution to the idea on demise of cinema and its rooted cultures instead of a good film with mixed and often confused motives. 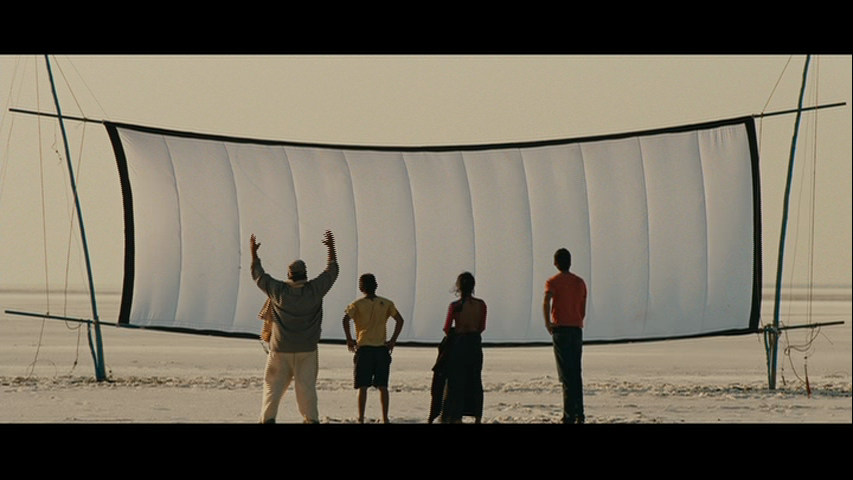 After having traveled some distance in the scorching sun of the desert toward the mythical fair that Om, the rusty, older, wise and proud mechanic who has seen many more Monsoons that Vishnu, wants to reach, four of them (along with a young boy, Vishnu and the Banjarin) arrive at another vast spread of desert, which deceptively looks like the salt desert of Kutch. There, Om proposes that if they construct the cinema, put out the film screen and the posters, fire up the projector and show films, water will come to them and the fair would arrive by itself. In a strikingly memorable image, lone man carrying water arrives and soon after, villagers approach from the horizon, starting a fair and expecting to see the film when the sun sets in. A heated desert is transformed into a colorful fair, with all the merriment and of course, a traveling movie theater, where the viewers are charged admission fee. The morning after, the crew finds itself alone in the desert and they set out to continue their journey. Either a dream of thirsty and hallucinatory travelers or a magical realist statement on the faith of cinema, this is the most memorable sequence in the film and could well have become the main engine of the narrative. The transitions are ambiguous for them to work in any of these ways; the return to the barrenness of the horizon and the heat of the sun are striking to underscore their greatness. 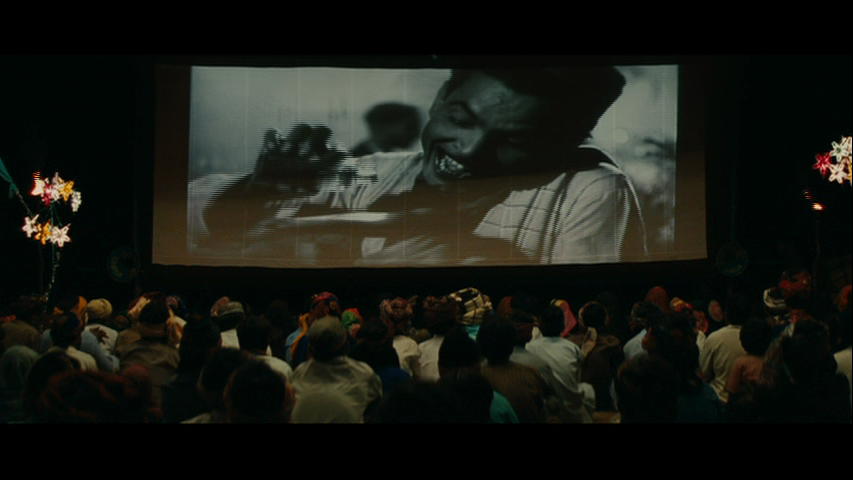 Here, the film succumbs to the temptations of unfocused film maker. The film skids off the road into a fit of parody, when the docile and irritable Vishnu takes on the water bandit with a wise-cracking proposition that the bandit lacks manhood (despite his guns) and could get it back with a massage of hair oil. The harsh and sharp water politics of the narrative carefully set out so far gets massaged into a bargain-deal Vishnu strikes with the bandit exchanging water for hair oil. Om proposes that night that the water so earned must be given back to the thirsty villagers. The haunting images of women walking through the desert looking for water are erased by an empty exchange about how corporations and the bandit are all corrupt in similar ways in stealing water. It must be hard to resist the temptations of changing the whole world with one narrative so why miss a chance when you have one! 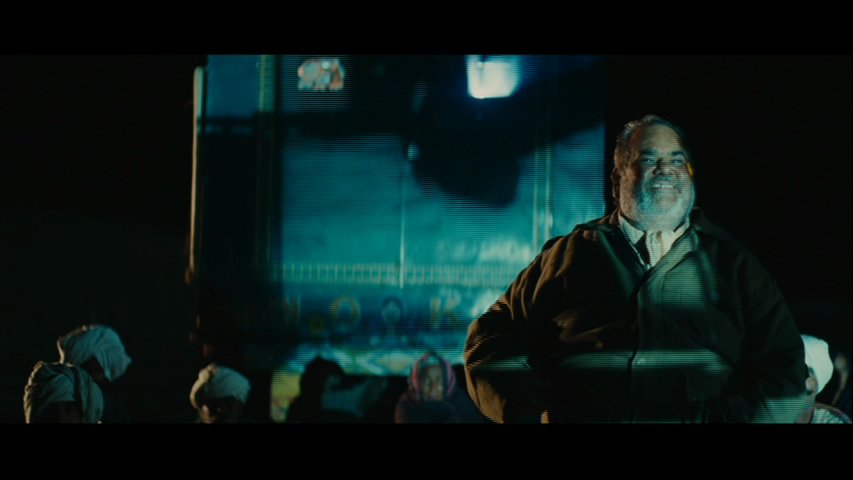 There could be many parallel metaphors/figures running in the film. The deprivation of water and the vacuuming of cinema traditions from the rural culture are not dissimilar. The age-old city-country divide between Vishnu and Om, from instrumental rationality of just taking the truck to its destination and the search for the faith (in the fair) are not disconnected. The idea of “self-discovery” so repeated in reviews is not that different from the realization that either cinema or water (or both) ought to be returned to their proper places, in the hearts and lives of the people. When its search for direction in the desert could have served as a potent metaphor, Road, Movie (2010) wanders off the road it could have charted itself.