I have been watching police thrillers made by John Woo and Johnnie To for a while now. They have reinvigorated the police-crime dramas by instilling into them a cinematic style and finesse of mise-en-scène. They inspire filmmakers from around the world, Martin Scorsese among them. The trope of police corruption is quite common in cinema and in their films, it is elevated to an art form, graced by popular film stars and narratives of loyalty, betrayal, and violence. The trope descended from the screen into our lives quite some time ago and in the U. S., it has become a flashpoint for struggles of racism, militarization and institutional corruption. Violence on the screen remains remote, still the realm of fascination for millions while little changes in corruption and violence of everyday lives.

Vetri Maaran’s film, Visaaranai (Interrogation) is different. It is miles away from the romantic stylization of the films in 1970s and 1980s. Ground began shifting after Anurag Kashyap’s Ugly and the spate of films influenced by the trends in realism in Indian cinema. In Visaranai, there is no stylization and glorification of violence as in the films of Woo, To, or Scorsese. It takes a step beyond Kashyap’s but remains in the realist lexicon to deliver the strongest punch we see on screen against police corruption and brutality. The narrative has a relentless pace, overpowering one scene of brutality over another and for us, moving from one tragedy to another. With such naked reality in our face, does anything change? 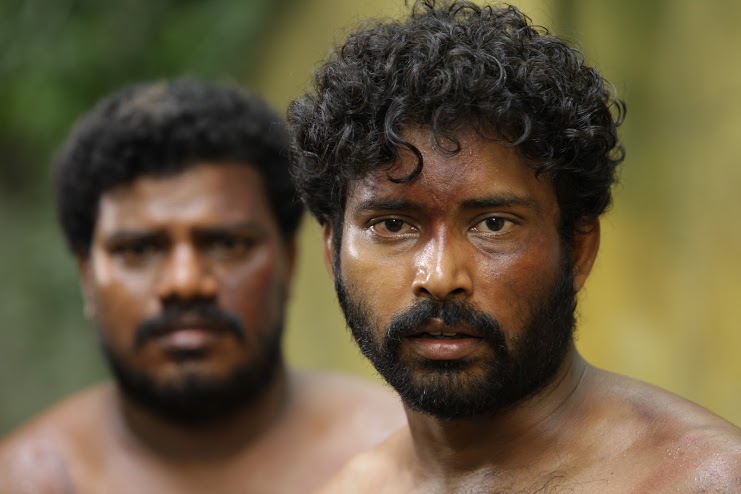 The film introduces us to the plight of migrants from Tamil Nadu to Andhra Pradesh, seeking low-paying jobs. Clash is inherent in their stories on many levels, languages, cultures and ethnic hatred from the Telugu toward the Tamil. Three of the four laborers are rounded up by the police looking for a robbery in a rich neighborhood. As is often the case, they are scapegoats so the cops can move on to gain favors from the rich and the powerful. Unwilling to admit their guilt, led by Pandi (Dinesh Ravi), they face increasingly intense abuse and torture at the hands of the police. Intent to prove their performance record to gain favors from the superiors, the police inflict increasing measures of torture on the migrants. The scenes are harrowingly brutal, intensely centered upon the materiality of the body. When a Tamil inspector Muthuvel (Samuthirakani) arrives at the courthouse chasing his own target, they find some relief and release at the hands of the Telugu only to land in a series of scenarios where the police stoop to increasingly lower rungs of the ladder to prove themselves.

In the scenes of torture in the first half of the film, it begins with kicking and hitting with lathis, the wooden sticks that are the prosthetic extensions of police uniforms. Soon, Pandi becomes the main target, refusing to bow to the demands because he insists he did not do anything wrong. Effectively, Vetri Maaran and his cinematographer Rama Lingam focus on Pandi’s body, as it is subjected to repeated hits, and remain there as if it is the center of the world and the police is at the margins and the world is only a witness. Transitions and cuts are rapid and structured in between the movements of others while Pandi limps, struggles, wavers, trembles and then attempts to stand up again. All that matters is what is done to the body in the name of justice and for the sake of one authority satisfying another. The body is the scene of the power of corruption, struggles to remain in its place, defying power with its own resilience. These scenes are central to the film; the most effective nucleus; what follows is the drama of power, disclosing a web of corruption and incompetence.

The film remembers editor late Kishore Te, a talent with a gift for pace and positions. His work here is masterful.

It appears in the first half of the film that the film is about ethnic hatred of Tamils as it is about police brutality. The scene shifts to Tamil Nadu, the native land of the migrants, where the abuse continues, except now it is trapped in the guise of deceptive generosity of inspector Muthuvel. The film defeats the monotony of violence as brutality is transformed into competition for power. Police are involved in politics and politicians, shamelessly working as their handmaidens. They are entirely oblivious to their own caste system, where principles and integrity are only fictions. Pandi and his fellow laborers find how low their station in life is when they realize submission to goodwill is just as awful as surrender to torture and power. The tone in the mode of violence holds the narrative power of the film, which is based partly on Lock-Up, an account written by an auto driver Chandra Kumar of his real life experiences in an Andhra Pradesh prison cell. Because of this shift, the film ceases to be a one-note expose of custodial torture. Attention on miniscule levels of corruption expose the tentacles of power that are too hard to detect and impossible to defeat.

Winner of Human Rights awards, Vetri Maaran’s Visaaranai demands eye-opening look at corruption and power. The film refuses to construct the distance provided by flashy styles of cop and corruption dramas. Life unfolds here in its brutality. This is interventionist cinema; demanding that we shake our complicity.